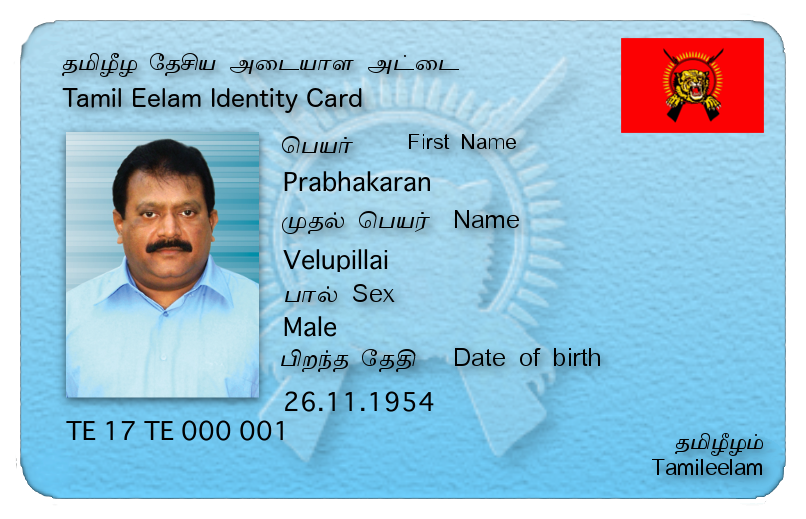 By purchasing the TEIC (Tamil Eelam Identity Card) I confirm the following facts:

As the Eelam Tamils are a national race, it is essential to protect their individuality. We have a collective language, culture and history and these were all established within our traditional homeland of Tamil Eelam.

As a result of the political framework established in 1833, the unique character of the Tamil nation faced multiple threats. Some of the influential factors for this include the failure to acknowledge the Tamil nationality under such political framework and the planned destruction of Tamil nationalism. As a result of the Tamils’ establishment of a ruling mechanism for themselves within the island of Sri Lanka during the pre – colonial era, the Tamils were able to maintain their integrity and retain their sovereignty. The sovereignty derived from such history was destroyed by the Portuguese.

Sri Lanka gained independence from Britain in 1948. From that point onwards, Mahavamsa ideology was incorporated into the political frameworks that were left behind by the British. With this ideology as its basis, it is believed that the island of Sri Lanka was selected as the location that protects the purity of the religion of Buddhism with the Sinhalese as its guardians. Furthermore, the Tamils are established to be the intruders of the island through this ideology and are therefore viewed to be the enemies of Buddhism. It is as a result that the derogatory terms of “Para Dhemala” are used against the Tamils.

All political events from then onwards occurred with Mahavamsa ideology as its basis with the destruction of Tamil nationality as its objective. In addition to such political manoeuvres, they proposed to destroy the traditional Tamil homeland through planned Sinhala settlements.

Non – violent opposition was expressed against such actions, with the Tamils attempting to secure and retain their position within this political structure. Due to the escalation in the violence used to stem the non – violent protests, the Tamils intended to re- establish their sovereignty. They came to this decision as it was only through Tamil sovereignty that Tamil nationalism could be protected.

The Vaddukoddai resolution was fulfilled with this aim and the nation of an independent sovereign Tamil Eelam state was demanded. It must be noted that this resolution gained the Tamils’ democratic order in 1977.

The Eelam War began following the burning of the Jaffna Public Library in 1981 and Black July pogroms in 1983. The final goal of this war was executed with the basis of the Tamils’ democratic order. During this war the Tamils’ sovereignty was protected against Sri Lanka, India and two other powers and was centrally administered under the Liberation Tigers of Tamil Eelam. This is referred to as the “acquired sovereignty” of the Tamils. It is with this sovereignty and the architectures of the administration of this sovereignty that a new social form came into existence. Through this social framework, feminist oppression, casteist oppression and other societal oppressive mechanisms were eliminated.

As a result of the existence of geopolitics and with a basis in new global doctrines, the Tamils’ acquired sovereignty was destroyed. Whilst such destruction was conducted by the Sri Lankan government ,the nations of America, India, Britain, China and the European Union were also involved. Therefore, the blood of the Tamils are on their hands as well.

Between October 2008 and July 2009, 146, 679 Tamils have been reported to be missing. In addition to the mass killings that were recorded during times of conflict, the condition of the Tamils has deteriorated following the end of the war. The structural framework of the Tamil’s homeland has been reconfigured through the appropriation of multiple Tamils’ plots of land and the planned Sinhala colonisation of Tamil areas. It is as a result of such activities and other activities that the Tamil nation is to be completely destructed.

It is essential to examine the linkages between the history of the island of Sri Lanka, the atrocity of the annihilation of Tamil sovereignty and the consequences of the loss of Tamil sovereignty. As all of these are conducted with a basis of Mahavamsa ideology, it can be ascertained that a genocide is being conducted against the Tamils.

As the Tamils did not surrender in 2009, the doctrines of Tamil sovereignty were not destroyed. We would like to emphasise through these identity cards, that we would engage in attempting to end the genocide that is being conducted against the Tamils. We firmly resolve that we will continually remain engaged with Tamil sovereignty and Tamil nationalism.

Only small projects can be realized when there are no financial funds available.Our goal is to implement political projects and set the foundational stuctures for our homeland. The contribution of each and every ID-owner will help to get one step closer to our vision, Tamil Eelam.